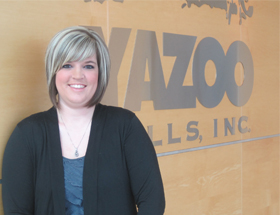 Jessica Bachota joined our ever growing team as a Receptionist in early December 2013.  She has worked in customer service as a receptionist for eight years at State Farm offices.  She enjoys working with the customers on the phone and feels she brings a “ready to go attitude” on a daily basis.  Jessica is always eager to learn new things and meet new people.  Every morning before coming to work, she reminds herself to remember to smile throughout the day.

Jessica has been married for almost three years to Kevin, who also works here at Yazoo Mills.  They have an eight-year-old son named Austin, a miniature dachshund named Mimi and a boxer named Oliver.  During her free time, she enjoys attending church, cooking, and watching her husband coach their son’s baseball team.  She is a family person and tries to spend as much time as possible with them.